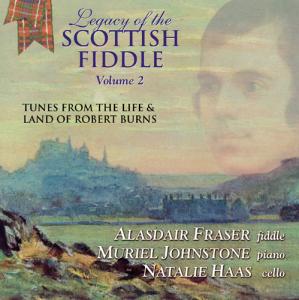 On Volume 2 of this series of the traditional Scottish fiddle repertoire, Alasdair plays 'Robert Burns' on fiddle, accompanied by Muriel Johnstone (piano) and Natalie Haas (cello).

The project was inspired partly by the comprehensive book The Songs of Robert Burns by James C Dick, published in 1903. The author meticulously sets the historical and social context of Burns' work, and re-connects his lyrics to the melodies that Burns had intended. The published collections of Burns' day became the basis for selecting tunes for this recording. It was a time when every class of society danced vigorously. A fiddler might play for classical concerts as well as country dances and courtly balls. Many of Burns' poems and letters refer to fiddle music, fiddlers, and the dance, giving us insight into the social life of the day - indeed he himself was a fiddler.